This prototype is a Twin Stick Rougelite based on  Greek Mythology, where you go from dungeon to dungeon, collecting and buying items, in order to build up enough strength to beat the final boss, Chronos.  In the current state of the game, the final boss is not present.  Enemy behavior is not present either.

This game supports up to four controllers.

When you start this game, you will spawn in the middle of an island, with a dungeon on each corner of the island.  Heading to one of these dungeons, there are a couple key features.  The red squares are enemies, which can be killed for coins.  There is also a free item near the center of the dungeon, and the large rooms contain three items, which can each be bought for twenty-five coins.

There are currently three items in the game, all with placeholder sprites

2. Pandora's Box, extra life, though since you can't die, it isn't very useful

- Too much is in comic sans

- Chance for dungeons to generate without an entrance 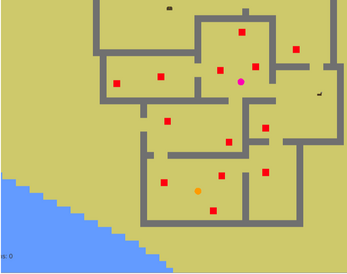